This site was designed for the latest version of Chrome, Firefox, Safari, and Internet Explorer (version 10+). Some features may not work correctly in your browser. OK


Haynes Ford attended Kent's All Ford Show on Sunday 23rd April 2017 at Aylesford Priory. On display, we had our Steeda Mustang Q350, Focus RS and M-Sport Ranger. The event was a fantastic opportunity for Ford enthusiasts to meet and display their vehicles. It was great to meet so many of you. 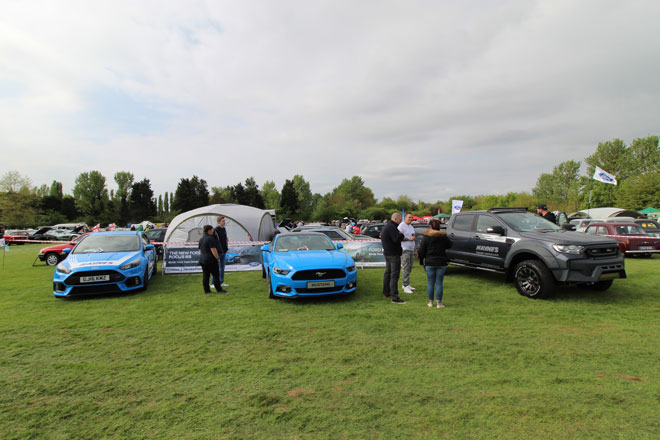 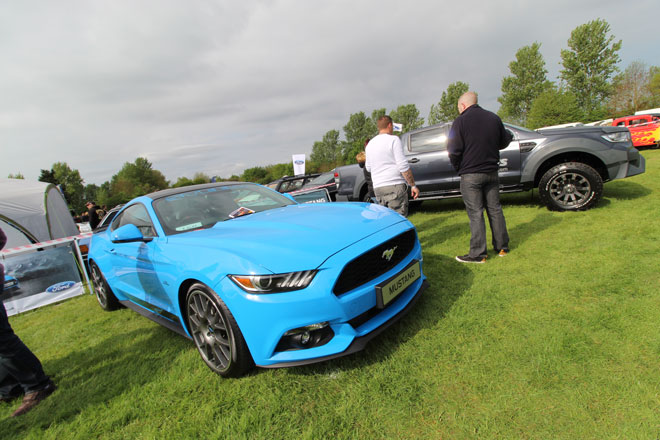 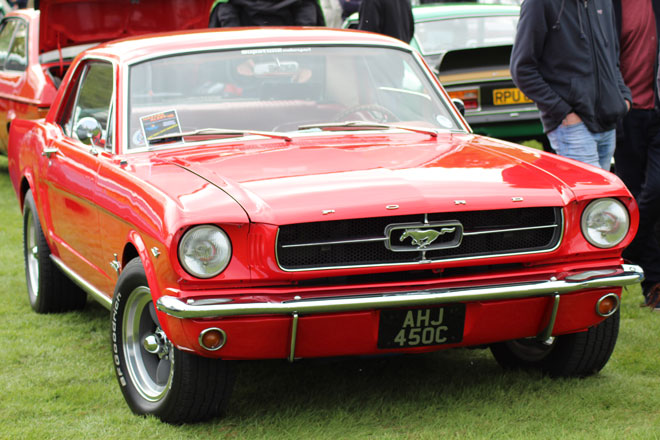 
On the 10th and 11th of June, we attended American SpeedFest at Brands Hatch. This was the third year that Haynes Ford have supported the American themed event. Our stand was the biggest we had exhibited with so far, with 5 different vehicles on the stand and 2 being used as track vehicles on the circuit. We had our Classic 1965, Focus RS, Van Sport Ranger, Steeda UK Q350 and our V8 Mustang on the stand, with our Ford Mustang and Ford Ranger demonstrators on the track.

On our stand, we were selling small items from our KentMustang.com accessory and merchandise shop. The Haynes Ford staff were available to chat to passers by about our cars, servicing options and upgrade performance packages. The event was a huge success with visitors, as American motoring was combined with great food, great music and great entertainment. Classic American cars were showcased, so our Mustang really did fit right in. As a spectator, you could witness the main event - NASCAR Whelen Euro Series, as well as Pickup Truck races, cheerleaders, the Sprint Cup and plenty of demonstrations round the track. It was a fantastic event, where we were excited to meet so many different people with varying interests. It was an all-American day of motorsport entertainment. 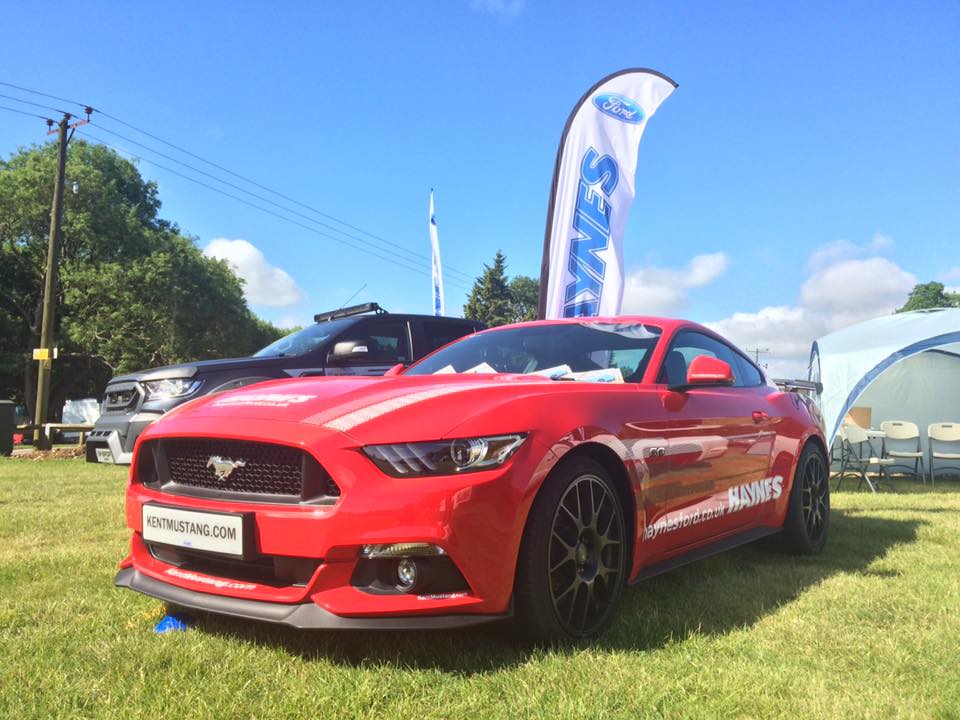 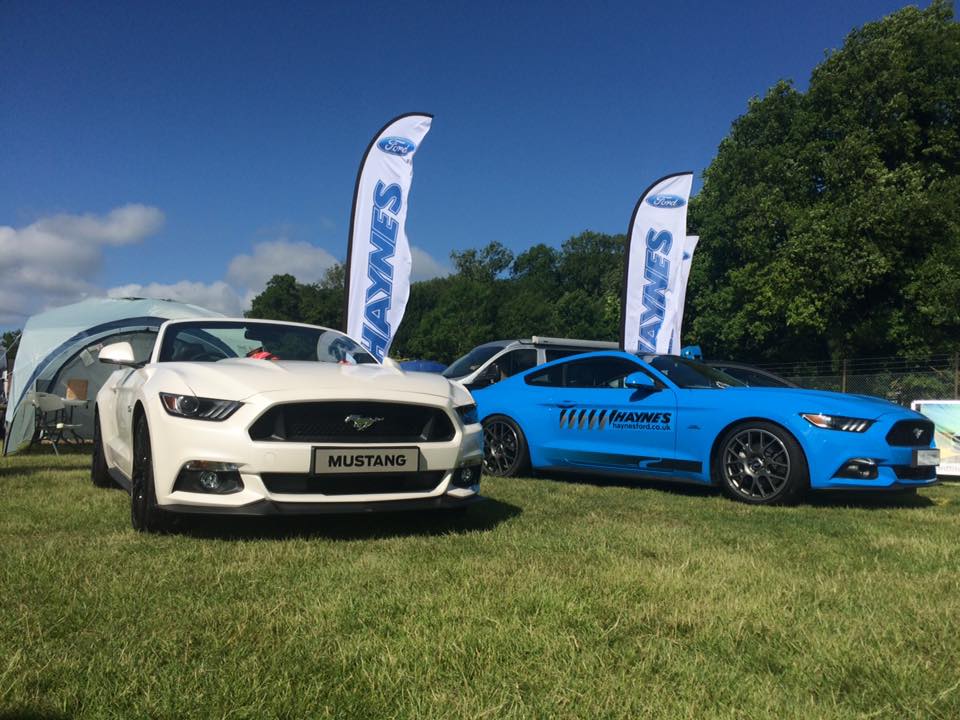 We attended Tunerfest South on Sunday 25th June at Brands Hatch. It was a great day with the Steeda UK Q350, our V8 Ford Mustang and Ford Focus RS demonstrators. There were some fantastic cars on show and it is well worth a visit if you have an interest in Performance Cars. It was an exciting event which focuses on high-end tuning, where visitors came to display their modified vehicles and take them for a ride on the track.

Tunerfest South promised it would be adrenaline-filled, and they certainly fulfilled this promise. Time Attack were testing car performances by measuring lap speeds and those who compete in Time Attack normally sport highly-modified vehicles. This will generally include huge rear wings, spoilers, exhausts and much more. There was a lot of tension during these races, where competitors are desperate to get the best time. Haynes Ford are looking forward to visiting again in 2018! 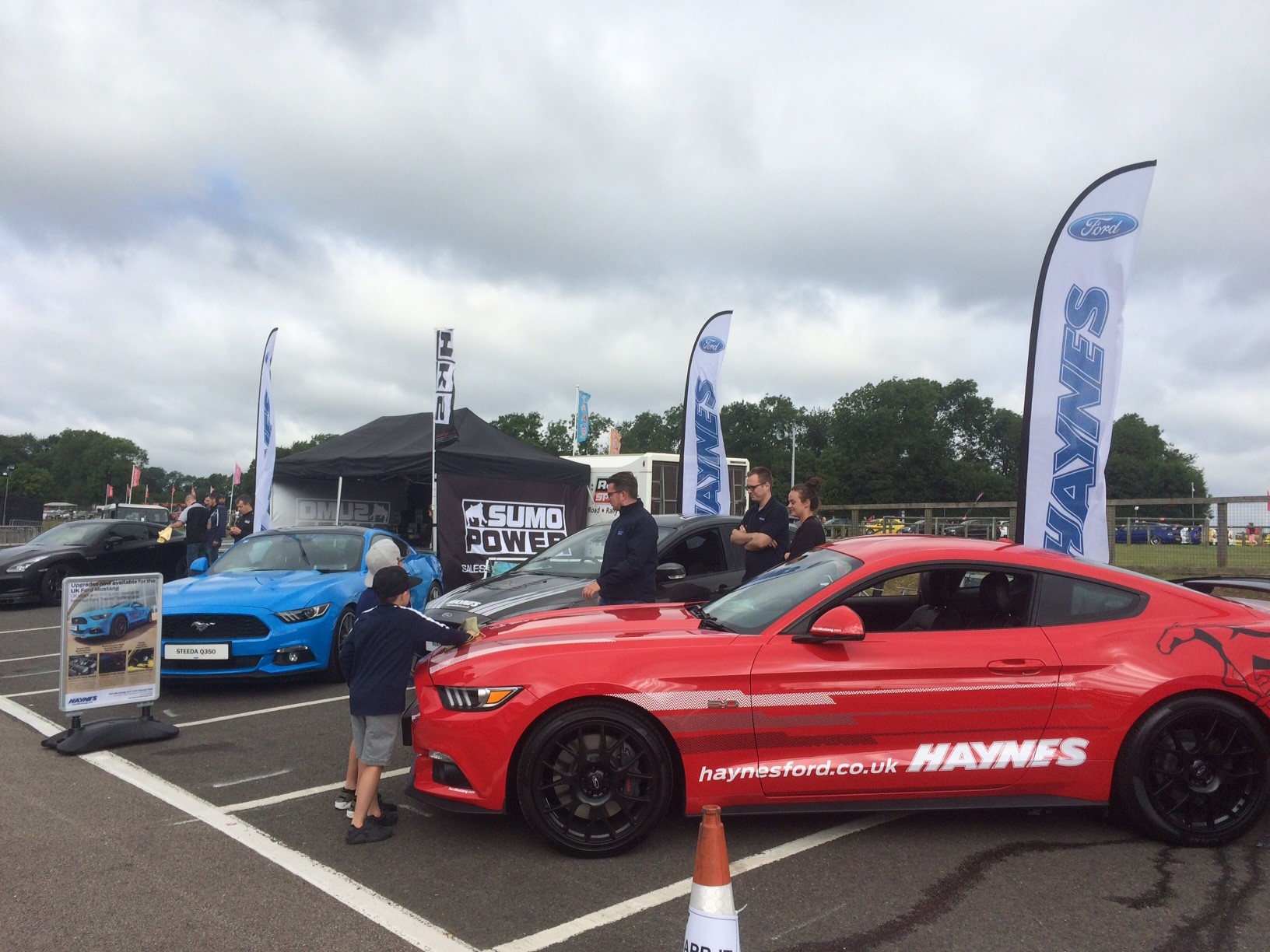 On Saturday 1st July, we attended the Harley Davidson Independence Day BBQ at the Harley Davidson Aylesford dealership. This event saw a celebration of all things American, from the bikes, to the food, to the music and to our V8 Ford Mustang. Our American Muscle Car managed to fit in very well. Haynes Ford enjoyed live music and American-style food, including burgers, hot dogs, pulled pork, and more. Harley Davidson were advertising bike offers, painting and pinstriping demonstrations for the bikers, a custom bike contest and an eating contest! It was a celebration of American heritage and we hope to visit again in 2018. 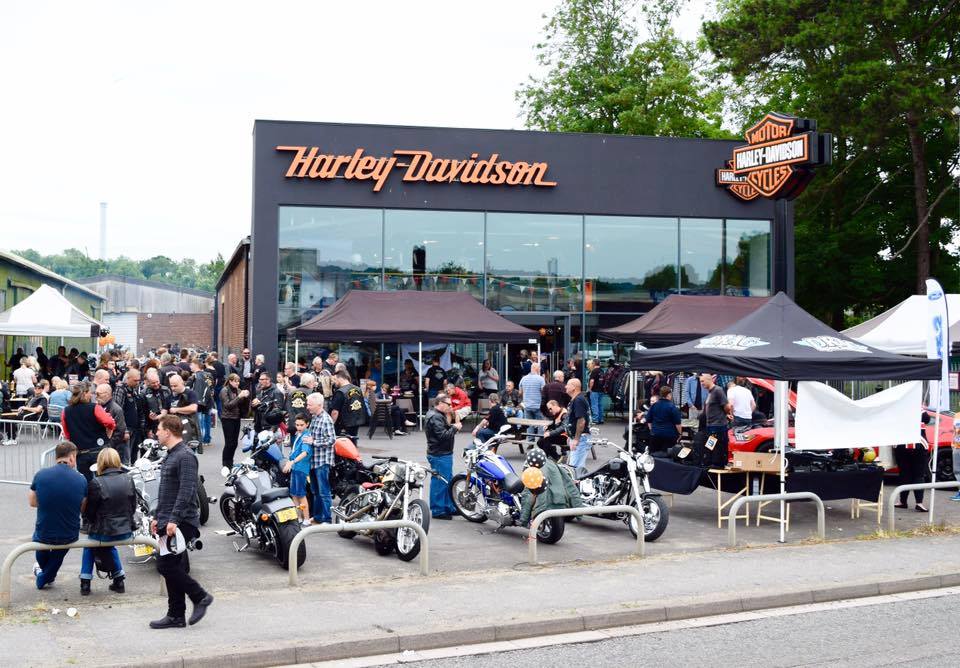 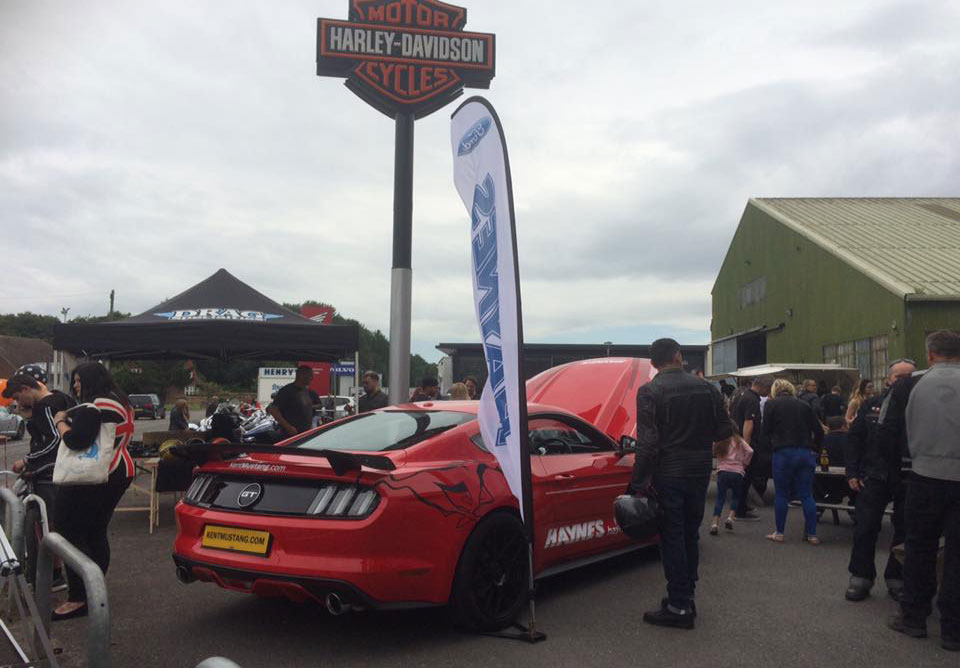 On Sunday 17th September, Haynes Ford hosted their very first Ford Performance Day by opening up their large site to Kent's Ford Owners clubs and enthusiasts to display their vehicles. With background music provided by local duo 'The Cheeky Blinders', vehicle owners mingled together, along with members of Haynes staff, enjoying the fantastic weather and viewing the multitude of both new and classic Ford models on display. There were around 100 vehicles on show, with beautifully restored examples of Ford Escorts, with a Zephyr, Cortina's and a Capri also featuring. The care shown and meticulous keeping of all tax discs by one attendee from his 1983 Ford Escort, bought by himself from Haynes provided a real talking point for all who walked past.

Ford's latest Performance models were well represented by owners who had purchased from Haynes, with the deep rumble from the V8 Mustang GT's, in various colours and with various graphic additions. Haynes Ford took the opportunity to place their own 1965 Classic Mustang on display, which was well received by guests and with many comments on the standard of paint restoration completed by our very own Accident Repair Centre. The company's current Mustang and Focus RS performance demonstrator models were used to take guests for test drives around the roads of Maidstone.

Refreshments were available and 2-wheeled American performance interest was catered for by Robinsons Foundry from Canterbury displaying 5 of their latest Indian motorcycle demonstrators. Louise Cook, Maidstone's Rally Champion and sponsored by Haynes Ford, was based in the car showroom with her racing simulator, set up with the 9-screen technical power wall in the showroom making the laps seem realistic and lifelike. There was also a face painter on site and colouring sheets were available for the smaller Ford fans, creating a real family atmosphere.

Steeda UK representatives and Haynes staff were on hand throughout the site ready to advise on Performance upgrades and generally chat with visitors, owners and enthusiasts. Haynes are pleased to have hosted a local show for the many local Ford enthusiasts who really seemed to have enjoyed the day. Feedback and social media interaction shows that there is enough interest for Haynes to do a show like this annually.

It was great to spend a weekend at Robinsons Foundry in Canterbury, South-East retailers for the UK Indian Motorcycle Company. Haynes Ford took their V8 Ford Mustang to the event. The Test Drive event for the American iconic motorcycles was hosted by the very friendly team from the Foundry and it was a pleasure to show both themselves and their customers some American 4-wheel muscle power. There are a lot of very knowledgeable and enthusiastic advocates of American Rar Power in the motorcycle world and a great relationship has been formed between Haynes Ford and the Indian Motorcycle Company. We look forward to working closely with them again! 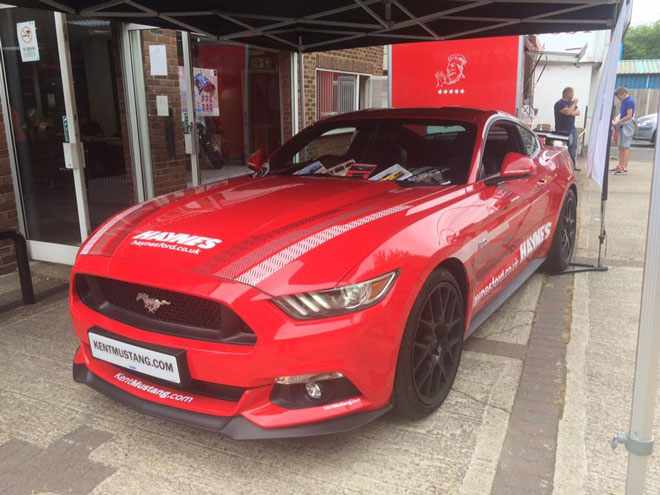 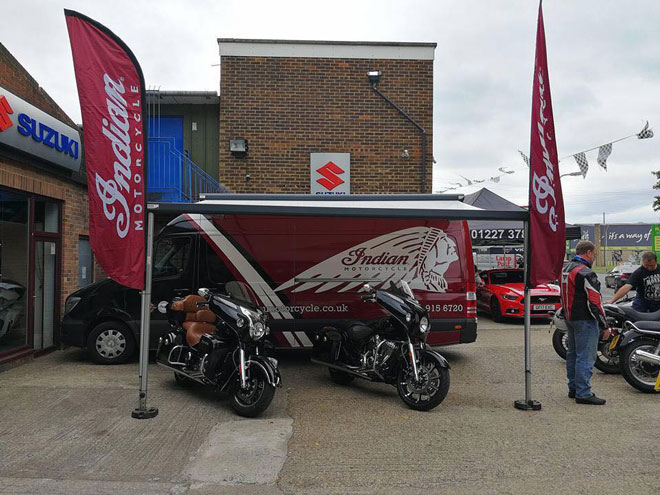 Haynes Ford attended the Duxford Spring Car Show on Sunday 30th April at the Imperial War Museum. We took along our red Ford Mustang V8 demonstrator and Grabber Blue Steeda Q350 SSV Mustang. There was a large turnout of contemporary and classic cars from various clubs and owners, with some of the most famous manufacturer models on display. Our Mustangs' were a hit with passers by, with many enthusiasts stopping to have a look. It was a great event with lots of stalls available to browse and cars to see. 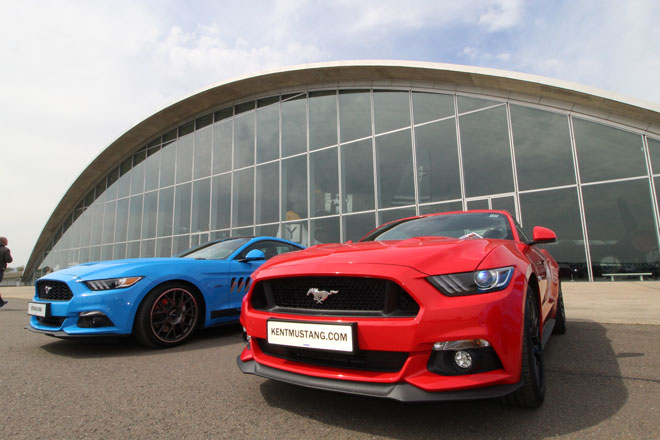 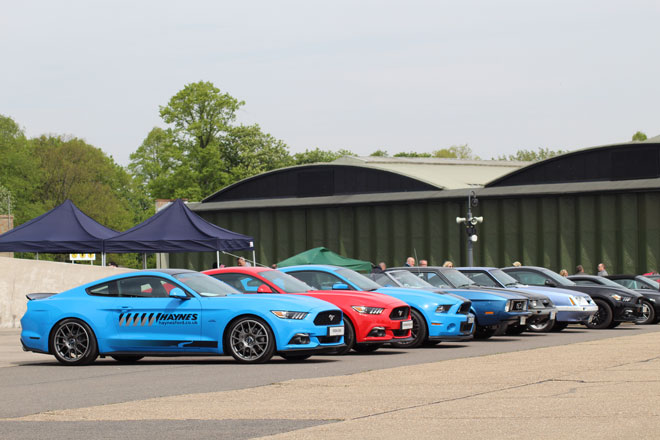 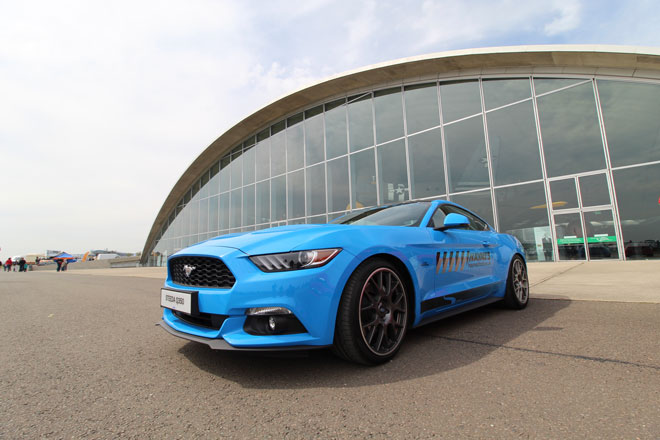